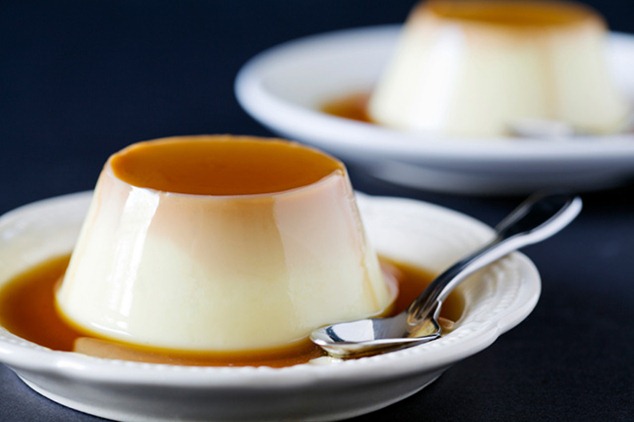 With Cinco de Mayo approaching, we were trying find a delicious South of the Border dessert to make for a blog post. This led a topic of great debate in our kitchen. Where the heck does flan come from? They serve it at Mexican restaurants, we’ve all had it in Mexico, and yet the name in no way sounds Mexican. I was sure it was of Spanish descent, Tina, our graphic designer, attested to it being French, and Lucretia, our marketing specialist, swore it was Italian.

So I did some research and it turns out we were all kind of right.

Pronunciation: According to the Mother Ship of all pronunciation websites, Forvo, you’re supposed to say “flayn,” as in it rhymes with “plan.” Glad that’s settled.

Origin of the Name: The name comes from the Old French word, “flaon,” from the Late Latin word, “fladon,” which is derived from the Old High German word “flado,” which means a flat cake or object.

History: Like many desserts (including our beloved cheesecake), flan’s existence began during the Roman Empire. The Romans were the first to domesticate chickens and they found themselves in the middle of an egg surplus. So they used techniques they stole learned from the Greeks to develop new egg-based recipes. These recipes, as you can imagine, resulted in loads of dishes and desserts, including flan.

Back then, most versions of the dessert were savory rather than sweet and included flavors like eel sprinkled with pepper. But a few early recorded recipes contained the only sweetener of the day: honey. And as the Romans conquered basically all of Europe, their customs, beliefs, and recipes went with them. The sweet variety of flan gripped the newly vanquished lands and when the Empire fell in 476 CE, flan survived.

Of all the peoples introduced to this dessert, the Spanish were particularly taken with it (and were the first to top it with a sweet caramel sauce). Like the Romans before them, the Spaniards brought flan to new lands, when in 1518, the famous conquistador Hernán Cortés landed in the Yucatan Peninsula of Mexico.

The Mexicans took flan to a whole new level. They created coffee, chocolate, and even coconut flavors and the recipes became popular not only in Mexico, but the rest of Latin America.

We hope you enjoy this traditional, worldly dessert on Cinco de Mayo (or any time, really) and from all of us at the bakery, thank you for visiting!

Katie Straw is the writer at Cheesecake.com, which provides an epic cheesecake experience, and currently resides in Manchester, New Hampshire.