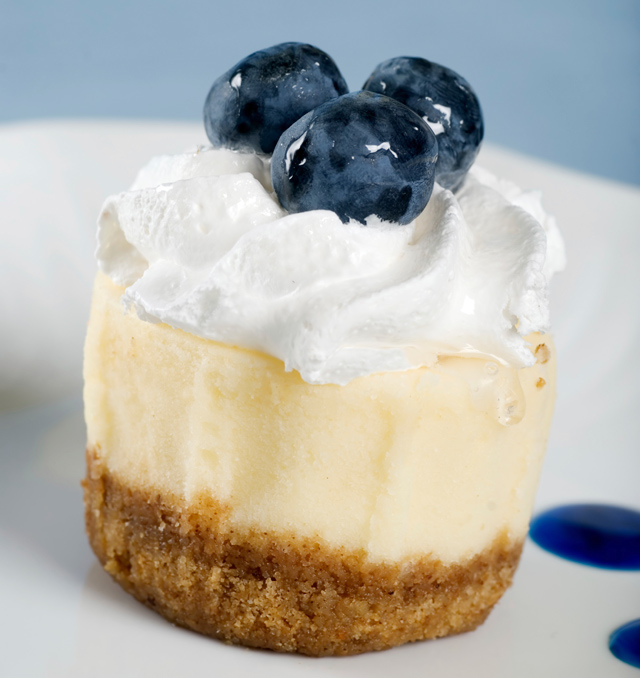 According to the National Foundation of Celiac Awareness, about 1 in every 133 Americans has Celiac Disease. Some people don’t even know they have it! With Celiac Awareness Day coming up on September 13, we thought we’d share a recipe for Gluten Free Mini Cheesecakes. Instead of flour or graham crackers, the crust is made with almond flour, which is gluten free.

Adapted from My Baking Addiction

Fresh fruit and whipped cream for topping, if desired

Preheat oven to 350 Degrees Fahrenheit. Place 12 muffin liners in a 12 cup muffin pan and set aside.

Add the almond flour, sugar, and salt to a medium-sized mixing bowl. Whisk gently until all the ingredients are combined. Stir in the butter with a wooden spoon and mix until incorporated.

Press some of the mixture into the bottom of each of the muffin liners, being careful to use an equal amount in each liner. If your fingers are making it too bumpy, try using the bottom of a shot glass. You’ll use a little over 1 tablespoon of crust for each liner.

Place the muffin pan in the center of the preheated oven and bake for 10 minutes. The crust should be a light golden brown color. Let the crust cool for around 30 minutes before preparing the filling.

Add cream cheese and sugar to a medium-sized mixing bowl. Beat on medium speed until the mixture has a fluffy texture. Add the vanilla extract and salt and beat until completely incorporated.

Switch the mixer to low speed. Beat the eggs in one at a time until they’re well combined. Be careful not to mix the batter too much once you add the eggs. Shut the mixer off once the eggs are incorporated. Over-mixing will make the batter too tough.

Pour batter into each muffin liner to about 2/3 of the way full. Place the muffin pan back into the center of the oven and bake until cooked all the way through, about 10 minutes. You’ll know the cheesecake is cooked when the center of each of the mini cheesecakes don’t wobble when you tap the pan gently. The centers should be firm, but may actually look slightly undercooked. Once you let the cheesecake cool, the centers will set all the way through.

After the cheesecakes are done cooking, turn the oven off, but don’t remove the pan. Open the oven door about 12 inches and let the pan sit in the oven until completely cooled to room temperature, which should take a little over an hour. Take the pan out of the oven and remove the mini cheesecakes from their paper wrappers. Place on a serving platter and chill in the refrigerator for at least 2 hours before serving. Top with fresh fruit and whipped cream, if desired.